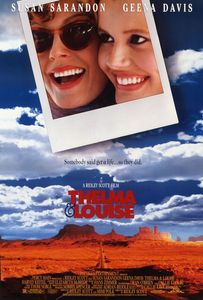 (On TV, June 2016) Watching Thelma & Louise twenty-five years after its release, I expected the experience to be less … upsetting than it was. After all; Thelma & Louise is recognized as a feminist classic, I’m pro-feminism; it’s a quarter-century later, social attitudes have changed … why should this be anything but a safe period piece? But it’s not. Susan Sarandon and Geena Davis star as two women out for a weekend away from their spouses, but find themselves driven to a crime spree through a set of circumstances—and despicable men. Thelma & Louise remains an infuriating film even today largely due to the realization that it’s still an exceptional film. Films with two strong female leads are still rare, and film to be written from such an explicitly female perspective are even rarer—especially in Hollywood. Ridley Scott may have directed the film with his typical visual flair, but most of its impact squarely depends on a script written by Callie Khouri, channelling female frustrations and anxieties in reluctant wish fulfillment. Pretty much all the male characters are out to do harm to our leads: It’s not just Christopher McDonald’s unrepentant abusive husband or Brad Pitt’s captivating first turn as an opportunistic thief: It’s also Harvey Keitel as an investigator, sympathetic to our protagonist but tasked to enforce the dominant male narrative that has designated the protagonists as dangerous criminals. Thelma & Louise still pushes buttons a quarter-century later, and forces audiences to realize how little progress has been made along the way. Perhaps worse is the realization that the kind of film that is Thelma & Louise, muscular mid-budget standalone thrillers with some social relevance, have been almost evacuated from the Hollywood scene, replaced by fantasy narratives designed to sell latter instalments. I’m upset all right, and I can’t think of higher praise for the film.