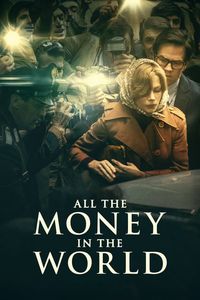 (On Cable TV, August 2018) Some movies become famous because of the actors that are in it, but All the Money in the World is a rare reverse example, famous for who’s not in it. Namely Kevin Spacey, whose sexual misconduct became widely publicized in the short span of time after his important supporting role in the film as J. Paul Getty was shot but before the film was released. Rather than shrug their shoulders and release the film as-is, the producers, along with veteran director Ridley Scott, decided to take another riskier path: Recast the Getty role with Christopher Plummer and reshoot all the scenes involving the character. This isn’t quite as insane as it sounds, considering that the character is mostly confined to mansion rooms in one of the film’s subplots. And it worked: Not only was Scott able to replace one significant actor in a ridiculously short amount of time while the film was nearing its release date, but you really can’t tell in the finished product: It’s as if Plummer had been there the entire time, and his performance is rock-solid enough that he ended up nominated for an Oscar. In comparison to the production drama, the story in All the Money in the World seems almost pedestrian, portraying the kidnapping of the grandson of one of the richest men in the world back in the 1970s. There’s an intriguing re-creation of mid-seventies Italy, dark machinations by an incredibly rich man not inclined to negotiate with kidnappers, and some funny business between the kidnapped man’s mom (Michelle Williams, better than usual) and the specialist hired to get him back (Mark Wahlberg, rather ordinary). The drama is solid even though the film itself feels sombre, ponderous and overlong in the middle. Perhaps the most interesting thing about the finished result is a demonstration of the way excessive wealth alters the world around it, twisting human relationships, corrupting individuals (the Getty patriarch is really not a nice person) and inviting predators to make their moves. Alas, not quite enough time is spent on this idea, as the film flirts with romance and spends a lot of time kidnapped by its own subplots. (It doesn’t help that the film has numerous deviations from the historical record.) It’s not a bad movie, but it could have benefited from a lighter and shorter touch. But then again there’s Plummer delivering yet another great performance.