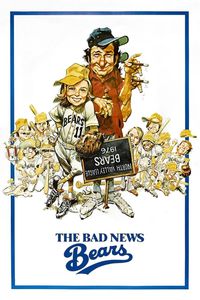 (On DVD, October 2017) Either they don’t make kids movies like they did, or The Bad News Bears was an oddity even in its time. As we meet our protagonist day-drinking in the parking lot of a neighborhood baseball field, it’s obvious early on that this film goes for hard-luck gritty life lessons. Fortunately, it works even as it’s horrifying by 2017 standards: Seeing kids tag along an adult drinking beer while driving a convertible is the kind of thing that register as a very different kind of funny these days. Walter Matthau is pretty good as the initially reprehensible protagonist—a washed-up failure who learns lessons from coaching a team of early-teen misfits who shouldn’t even be playing in their league. Good character work (especially by Tatum O’Neal as a tomboy with a history and Jackie Earle Haley as a teenage hoodlum) helps a lot, and The Bad News Bears’ fondness for its oddball characters remains endearing even today. The various slurs aren’t so much fun, but given that the film is forty years old at this point, it’s not entirely unexpected. The ending remains a case study in how to transform defeat into a moral triumph. The score is also noteworthy, taking bits and pieces of opera Carmen for inspiration. There’s also an interesting, very American atmosphere to this bicentennial film—the emphasis on baseball helps ground it into a depiction of suburbia circa 1976.

(On Cable TV, August 2016) Watching this A Nightmare on Elm Street remake so close to seeing the original is an exercise in comparing different film eras. The eighties were marked by rapid experimentation, at the frequent expense of polish or logic. The Teens, especially at the Hollywood studio level, are about crass commercialism, storytelling templates and visual slickness, even if the result often feels as if it comes off an assembly chain. In A Nightmare on Elm Street’s case, there’s also twenty-five years of accumulated fannish expectations regarding Freddy Krueger, who’s been featured in five sequels, one crossover, videogames, comics, Halloween costumes and enough merchandizing to make anyone wonder why we’re cheering for a serial child killer. Thankfully, the remake goes easy on the homages: While this new version of A Nightmare on Elm Street keeps more or less the same structure as the original and doesn’t dare deviate from its iconography, it’s also relaxed about doing its own thing. The acting is much better (Jackie Earle Haley is fine as Krueger, while it’s a surprise to find Rooney Mara in a pre-stardom role here), and so is the cinematography. The progress in special effects technology means that the remake is far more visually cohesive than the original. There is a pretty good sequence, for instance, in which action in a small supermarket seamlessly shift into a boiler-room nightmare and that’s the kind of intricately controlled special effect set-piece that the 1984 low-budget film couldn’t even aspire to execute. On the other hand, this reliance on digital wizardry means that this remake looks far more deliberate and restrained than the original. Everything from director Samuel Bayer seems planned, with few surprises or genuinely upsetting visions along the way. (This being said, I’m more annoyed than I expected at the last gory death of the film.) While this A Nightmare on Elm Street does stand on its own as an average horror movie, it does pale in comparison to the loopy terrors of its inspiration. Even five years after the remake, it seems clear that the 1984 original will be remembered for far longer.