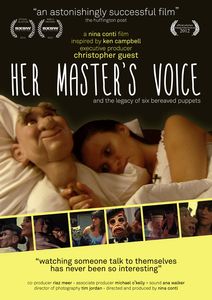 (On Cable TV, May 2013) I don’t usually review one-hour-long documentaries, but Nina Conti’s Her Master’s Voice is good and unusual enough to warrant an exception.  It begins as Conti, a talented comedian/ventriloquist, inherits puppets from her mentor and once-lover Ken Campbell (a fascinating figure who towers over the entire film); in a creative crisis, Conti mulls over donating the puppets to a specialized museum before abandoning ventriloquism and decides to attend a trade convention as a final hurrah.  This, of course, is just prelude to a journey of self-discovery, vocalized doubts and a fascinating look at the ventriloquism subculture as seen at a specialized convention. Much of the material is unexpectedly powerful, and much of this impact depends on the very nature of ventriloquism as an art form: Conti appropriately dwells on the nature of speaking through another voice, the carefully-unleashed insanity of a visibly split personality and, in perhaps the film’s most poignant moment, the “bereaved objects” that are the puppets of a dead ventriloquist, as “they have lost their voice”.  It’s funny, touching, perhaps a bit self-consciously melodramatic (which the film admits early on, suggesting that while all the footage has really occurred… well, much of it was pre-scripted.) yet almost entirely fascinating.  Effortlessly-likable Conti and her suitcases of alter-egos make for a sympathetic ensemble, even if it’s easy to step back and acknowledge how thoroughly viewers are being manipulated.  But that’s in the nature of ventriloquism, which is asking us to see a dialogue where there’s a monologue, drama where there’s a script, and a personality where there is an object –it’s entirely appropriate that a film about ventriloquism would exploit those same flaws in human cognition.  While the film could have been a bit better with just a bit more content (extra footage of Conti’s performances would have been welcome, particularly the routine at the Vent Haven ConVENTion –but then again that’s what the DVD is for.) and it’s useful to check one’s disbelief at the door for some of the most orchestrated dramatic moments, Her Master’s Voice is a unique documentary, alternately hilarious and touching.  Few will be surprised to learn by the end of the film that Conti did not hang up her puppet (in fact, a bit of research shows that she has returned twice to the Vent Haven ConVENTion so far) but all should be glad that she hasn’t.  Trivia note: The film list Christopher Guest as an executive producer, which is appropriate enough since I first saw Conti perform as the best part in his otherwise-disappointing For Your Consideration.