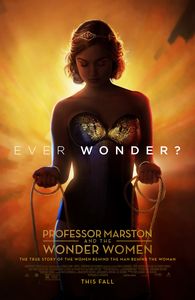 (On Cable TV, November 2018) I know that celebrity crushes are not a valid component of clever critical assessments, but I do have a big crush on brainy brunette Rebecca Hall, and seeing her pop up as a strong lustful muse in Professor Marston and the Wonder Women checked off an impressive number of boxes in my list of reasons why I had to watch it. As it turns out, it’s a film about one of my favourite bits of comic book history: the remarkably daring origin story of Wonder Woman, as coming from the feverish imagination of an academic with a number of then-unusual fetishes. Wonder no more why Wonder Woman loves detecting lies, strong rope, and a bit of bondage: this was right out of its creator’s own preferences. The bulk of the story takes place during the 1930s, a time not usually known for its free-thinking attitudes. In this context, William Moulton Marston, his legal wife Elizabeth and their polyamorous partner Olive Byrne are people out of time. Driven out of academia after inventing the lie detector but having rumours of their unconventional relationship get around, they make ends meet through various means, until Marston hits upon the idea of vulgarizing their ideas through the medium of comic books. Alas, the story doesn’t have a happy ending … but the way there is unusually interesting, with three strong performances from Luke Evans, Rebecca Hall and Bella Heathcote, as well as skilful screenwriting and direction by Angela Robinson that manages to navigate a tricky topic without falling in exploitation. Professor Marston and the Wonder Women is probably doomed to remain unseen and under-appreciated, but I’m glad that it exists—not only as a showcase for Hall (who apparently has good fun in the early parts of the film as a foul-mouthed headstrong woman a few decades ahead of her time), but as a decent illustration of an iconic heroine’s fascinating creation, and a great portrait of freethinkers stuck in a society unable to accept them. 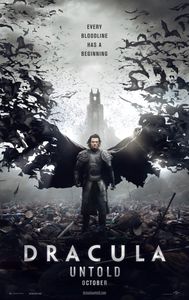 (On Cable TV, August 2015) Uh oh… I’ve got a problem.  I’ve seen Dracula Untold a few weeks ago, waited a bit too long to write my review and now I’ve got almost no memories of the film.  Worse: I’m not sure if what I remember is from this film or from the Underworld series.  Yeah, it’s that bad: Generic to a fault, once again obsessed with telling the origin story of a character that frankly doesn’t need any, Dracula Untold is as dull as the modern fantasy film can be.  About half a dozen other films have trod the same ground recently and they all fall neatly into the same unremarkable mold.  The special effects don’t add anything more to a dull story, and the film has the gall to end on a coda that suggests more installments.  (Heck, according to some rumors, this is the film that’s supposed to start an interlocking “Universal Monsters” film universe.)  Frankly, the studio is going to be lucky if anyone remembers this film a week after seeing it, let along years later for a sequel.  There is little in Luke Evans’ lead performance to create much sympathy for the vampire, or to inspire much in terms of appeal.  There’s nothing else in the script either, and the dialogues as the same kind of tripe we’re been hearing in all films of that subgenre lately.  I like Dracula, but in Dracula Untold they should have taken inspiration from the Untold part of the title and made another movie instead.