(On Cable TV, April 2014) The usual trade-off when watching mediocre movies starring Nicolas Cage is that however dull the film can be, at least Cage will be there to indulge into one of his usual bout of theatrical overacting. Sadly, we get neither a good film nor a typically unhinged Cage in Seeking Justice, with results that feel far more disappointing that had it featured another lead actor. To be fair, the film offers an intriguing premise: A bookish husband is promised vengeance against the man who assaulted his wife in exchange for an unspecified favour sometime in the future. Six months later, the favour escalates all the way to murder, and our protagonist gets stuck between an eager police force and a mysterious conspiracy. So far so good: Seeking Justice is heavy on mysteries for its first half, and then just as heavy on chases in the second. But what’s missing is Cage’s usual persona: in his quest to play a different character, he seems to forget everything that makes Cage, well, Cage. In another context, it may have been forgivable (see his performance in The Frozen Ground, equally restrained as the thriller around him) but here it just feels like a waste as the rest of the film cries out for some wild acting to go along its preposterous premise. But it isn’t so, hence Seeking Justice ending up as nothing more than a middle-of-the-road thriller, the likes of which are quickly sent to the home video market these days. January Jones continues not to impress here as the protagonist’s wife –she doesn’t get asked for emotional range, and so doesn’t have to deliver. The power of wildness is more obvious with Guy Pearce, who gets to chew slightly more scenery as the shaved-head villain. (One starts to wonder if the fault isn’t to be addressed to director Roger Donaldson: was he screaming “more restraint!” on the set?) Thematically, there’s almost something interesting in the portrait of urban decay as pictured in New Orleans (Cage must feel like a honored guest given the number of films he has anchored there lately.) and four-decades-out-of-date criminal sociology. While Seeking Justice is competently-made enough to avoid most of the pitfalls of bad films, it doesn’t get to do much more than be a serviceable thriller, and that’s too bad. 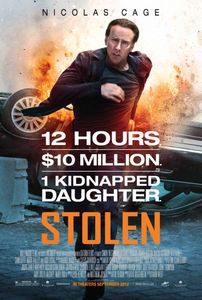 (Video on Demand, February 2013) As the frontier between small theatrical and big direct-to-video releases keeps blurring, it’s not much a surprise to find out that decent thrillers can pass almost unnoticed in theaters before making a bigger splash in as on-demand releases.  So it is that we have Stolen, a meat-and-potato thriller directed by veteran Simon West (Con Air, Tomb Raider, Expendables 2, etc) featuring the ever-unhinged Nicholas Cage popping up without much theatrical fanfare in 144 theaters across North America before arriving on home video.  While Stolen isn’t a great movie, it’s handled with some screenwriting finesse, directing energy and acting skill when compared to a lot of other theatrical releases (such as the similarly-themed Taken 2).  There isn’t much to the “genius bank robber is forced back into action after his daughter is kidnapped by an ex-partner” plot, but West’s direction keeps things moving, the script has unexpected moments of cleverness, the New Orleans backdrop is colorful enough (especially when you compare it to other films such as Deja Vu, 12 Rounds or even Hard Target) and the film doesn’t waste a lot of time.  Sure, it’s ludicrously-plotted, with enough contrivances, coincidences and conveniences to fill a duffel bag.  The dialogue isn’t stellar.  The characters are barely sketched.  But it’s not difficult to watch, and there’s a rough narrative drive to it all.  Nicolas Cage gets a few moments of typical freaking-out, and it’s always enjoyable to see a solid actor like Danny Huston get a few moments to himself.  The point being: Stolen is better than Taken 2, and as good as a few films with much wider releases.  It’s an acceptable way to spend a quiet evening, and sometimes that’s all that’s needed.