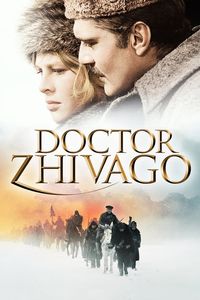 (On Cable TV, June 2018) I have little patience for anything these days, so getting me to sit down for three-and-a-half-hours to watch a Russian novel turned into an epic movie, even a David Lean movie, is asking too much. It took me four days to get through Doctor Zhivago, and I kept going only because the film is of some historical interest. Even then, the journey was gruelling. It’s not that the film is 193 minutes long—it’s that even for that amount of time, not a lot actually happens. It is a generational romance set against the backdrop of early-twentieth-century Russia, and yet it feels uncomfortably small, with a handful of characters bouncing against each other even in a country as large as Russia. To be fair, Omar Sharif is fantastic as the titular Zhivago, and Julie Christie isn’t bad as the lead female character. This being said, the show is stolen by smaller roles: Rod Steiger is delightfully evil as a well-connected politician, while Tom Courtenay has a great arc as the initially meek Pasha. Still, much of Doctor Zhivago unfolds slowly, with characters having intimate conversations while the country goes up in flames somewhere in the background. For an epic, it feels curiously small-scale and focused on melodramatic plot threads. Reading about the film, its troubled production and the historical context of the original novel is more interesting than the film itself—as I was wondering how a Russian film could be produced by a big Hollywood studio in the middle of the Cold War, the film doesn’t exactly act as pro-Soviet propaganda … and adapting the novel was seen as a big gesture against the USSR given that it had banned the book. Still, the result is an often-exasperating experience as nothing happens for a very long time. The film’s high points (such as the moments immediately preceding its intermission) aren’t, quite enough to make up for the rest, including an even more punishing framing device that adds even more minutes to an already bloated result. But at last it’s done: I have watched Doctor Zhivago and don’t have to watch it ever again in order to say that I did.

(On Cable TV, November 2017) Whenever I tackle an older film, I usually curse my lack of knowledge of the era and my imperfect understanding of the context surrounding the film. But in the case of In the Heat of the Night, I’m actually proud and thankful that I don’t have a deep understanding of the pervasive and violent southern racism that the film portrays. Built around a murder mystery in small-town Mississippi, In the Heat of the Night is really an issues drama, as a competent police officer from Philadelphia is semi-voluntarily asked to help with the investigation. The legendary Sidney Poitier stars as “They call me Mister Tibbs,” a gifted cop whose skills are dismissed by the locals due to his skin colour, and who gets into increasingly violent confrontations with those who wish he’d go away. The murder mystery is perfunctory, but it definitely takes a back seat to the social issues illustrated throughout the plot. Thankfully, there is some good character work along the way that helps make the film more than simply a moral lesson—The protagonist has significant flaws (pride, mostly) that are pointed out by other characters, and the lead sheriff’s (Rod Steiger) evolution from stone-cold racism to honest admiration is handled organically. Colourful minor characters help establish the torrid atmosphere of a southern town in the middle of a heat wave. Competent filmmaking, headed by director Norman Jewison (a Canadian, one notes), make much of the film look and feel just as compelling as it was back then. From a contemporary perspective, much of the movie, and the locals’ reaction to the protagonist, defies comprehension and almost approaches caricature—I’m glad to live in a world where that stuff isn’t as acceptable any more. In the Heat of the Night is a Best Picture Oscar winner and it’s easy to see why—even today, it blends genre entertainment with a strong social conscience, through compelling performances and good production savviness.

(On Cable TV, July 2017) Not all haunted house movies are created equal, and despite The Amityville Horror’s reputation, it ranks toward the low end of the scale. Part of it has to do with its familiarity: The haunted-house story has become a cliché at this point, and The Amityville Horror doesn’t renew much along the way, what with its hallucinations, Catholic curses, familiar plot points (save the dog!) and rather long duration time. James Brolin, Margot Kidder and Rod Steiger all do good work, but the subject matter is just tired—even more so if you’re not inclined to give any credence to the “based on real events” claim that surrounds the film. A few period details are intriguing (such as the acceptance of the paranormal by a supporting character) but much of it just feels dull, and some of the most promising material (the black ooze, for instance) don’t seem to pay off meaningfully. I used to think that the 2005 remake wasn’t very good, but it turns out that the original isn’t really good either.