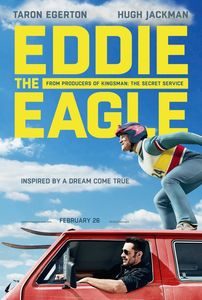 (On Cable TV, November 2016) When true inspiring stories go through the screen-writing process, the result is nearly always something like Eddie the Eagle. Someone’s life reduced to a three-act formula, selectively manipulating history, creating characters and manufacturing Significant Moments so that audiences don’t have to contend with the messy reality. Yes, there was an “Eddie the Eagle” who, against most odds, competed in long-jump skiing during the Calgary Olympics. The rest is pretty much fiction … but entertaining fiction. As a not-particularly-gifted but determined young man, Eddie Edwards discovers ski jumping at a time when the British presence in the sport is non-existent. After gruelling training and qualification jumps, Eddie goes to the Olympics where his determination become far more remarkable than his performances. The meat of the film is in the training sequences, as a disgraced American ski jumper (Hugh Jackman, likable and effective in a wholly fiction role) takes Eddie (Taron Egerton, not bad as the less-than-glamorous hero) under his wing and makes a contender out of him. Eddie the Eagle is assembled, block-by-block, according to a common underdog sports-drama formula. It’s generally well done, with moments of comedy that make the film feel quite a bit fresher than it should be. It’s also a close look at an unusual sport, and among Eddie the Eagle’s biggest achievements are half a dozen ways to make the jumps look thrilling. While the result is disposable entertainment, it works well enough.

(Video on Demand, June 2015)  Kingsman was billed as “Kick-Ass for the spy movie” and that did nothing to put me in a good mood given how I disliked Kick-Ass’ mixture of cheap cynicism, crudeness and hypocrisy.  It felt aimed at a far younger audience, and I feared that Kingsman would more or less go that same way.  But while Kingsman does have its own crude excesses in presenting its chav-becomes-suave plotline (oy, that final joke), it’s also gleefully fun and honestly enamoured with the material it emulates: It’s instructive to compare the film with 2002’s “hipper Bond” xXx and how eloquent Kingsman can be in promoting the classical gentlemen-spy archetype.  (Try not to quote “Manners maketh man” the next time you proudly pick up a good umbrella.)  Director Matthew Vaughn knows what kind of film he’s building, and the result is far more satisfying than his own previous Kick-Ass. It certainly helps that the film can rely on Colin Firth as the ultimate gentleman spy.  Firth, not previously known for anything resembling an action role, here gets two splendid action sequences –they may be heavily enhanced by blurry special effects, but he looks and acts the part well enough to convince.  The simulated-single-shot church scene is regrettably ultra-violent, but it’s also an anthology piece for a very specific kind of action mayhem.  Taron Egerton is remarkable as the lead protagonist, but the film is also filled with interesting supporting performances by Samuel L. Jackson (having fun at the expense of the usual villainous clichés), Sofia Boutella as an enabled enforcer and Mark Strong in a welcome non-antagonist role.  The editing and direction flows quickly and wittily, with a great soundtrack support and enough winks and nods to other movies to make it even more interesting.  A self-assured comedy with just enough action beats to make it a respectable spy thriller, Kingsman feels fresh and fun.