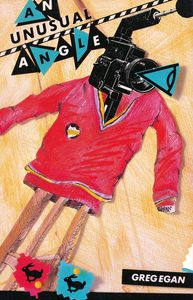 Authors who publish at a very young age (that is; before they’re ready) should be aware that anything they’ve written remains in their bibliography forever.  I’m not a big fan of holding earlier works against authors who later went on to write more polished works (everyone is allowed a few youthful indiscretions, and mine happen to be available elsewhere on this web site), but it’s certainly interesting to go and have a look at early works and draw links with what followed.

Ask around, for instance, and most Science-Fiction fans will tell you that Australian hard-SF superstar Greg Egan’s first novel was 1992’s Quarantine, published after Egan made a name for himself as a writer of fine short stories.  The truth, as more knowledgeable bibliographers know, is that Egan’s real first novel publication dates back to 1983’s An Unusual Angle, a novel that straddles the line between psychological drama and deniable fantasy.  Egan having being born in 1961, it would mean that the novel would have been written and published in his early twenties.

From the plot summary, we can guess that this is a novel by a writer barely out of school: It’s about a young man going through Australian high school and commenting on the inanity of what surrounds him.  Our narrator tells us that he has a camera in his skull, but that he can’t get the film out.  Much of the novel allows for some artistic discretion as to whether this is a literary device, a delusion or the truth.  (The final chapter, if taken literally, settles the question more conclusively.)

The point of the conceit is to allow Egan to describe four years of high school with a strongly detached narrator and movie-based metaphors.  Our narrator is brighter than anyone else around him, and seems passionate about film.  He describes school assemblies on a shot-per-shot basis, with occasional flights of fancy disavowed a few lines later.  Strongly isolated in his own head, the narrator has few (if any) friends, certainly nothing as conventional as a girlfriend and actually seems to despise both everyone and everything that’s not from him.  The cumulative impact of such an attitude against the world is toxic; the narrator becomes obnoxious, as the narrative can’t seem to find any joy in the world.  (And I say this as someone who often regarded high school in much the same “I’m bored; when does the real world begin?” attitude as our narrator here –twenty years of perspective works wonders at being embarrassed at our younger selves.)

Here and there, mind you, we can find glimmers of Egan’s later motifs and techniques.  Our narrator is unusually quick to explain the world in scientific concepts that wouldn’t be out of place in much of Egan’s later fiction.  The way he explains the camera in his skull is the kind of exotic biology that would pop up in his latter short stories.  Furthermore, the impulsion to dismiss much of the imposed events of the ordinary world and seek excitement in outlandish fantasies is common to many hard-SF readers, regardless of their age.

All of these quirks and hints make An Unusual Angle an unusually interesting read, especially for those who have read nearly everything else by Egan.  Even by SF standards, Egan often stands alone (his hard-SF novels often earn the distinction to be too hard for even dedicated hard-SF readers) and this sense of exceptionality permeates his first novel from beginning to end.  While Egan hasn’t disavowed this novel, he may regard it as non-essential work: a trawl through his extensive web site reveals only two mentions of An Unusual Angle: Once within his official bibliography, and another within an interview discussion of early publishing efforts.  So let us regard this first novel as a curio, and celebrate Quarantine as the real start of his body of work.