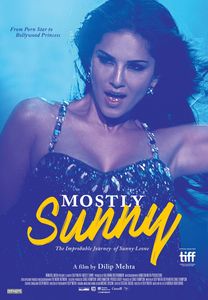 (On Cable TV, November 2018) You can find the darndest movies playing on cable TV channels late at night, and Mostly Sunny is one of them. It is, after all, the story of Sunny Leone, a Canadian-born, American-raised woman of Indian ethnicity who became a well-known pornographic star … and then somehow ended up a leading Bollywood actress. What makes the film extra-amusing is its pedigree as a Canadian production partially financed by tax dollars in an effort to develop Canadian content for cable TV channels. That’s right — Mostly Sunny is considered valuable cultural content. But jokes aside, Leone’s unusual story suggests a thicket of intriguing issues, especially given the Indian connections: How do her parent react in finding out their daughter’s first acting career? What about the reactions in the notoriously conservative Indian society as a known pornographic actress stars headlining mainstream movies? There’s quite a bit of dissonance verging on hypocrisy commented upon here — no one will admit seeing her earlier work, but everyone knows about it — and her second career is more than partially fuelled by her earlier notoriety: the film begins with her being a (paid) guest of honour at a wedding celebration. Expect some nudity but no explicit sequences along the way: This may be made for cable, but it is still made for cable. (Later accounts about the movie reveal that Leone and the director had a falling-out — She somehow expected the film to contain no nudity and he obviously disagreed. As a result, don’t expect Leone to comment fondly now about a documentary featuring lengthy all-access interviews with her and members of her closest circle.) Leone herself gets a lot of opportunities to express herself here — She comes across as down-to-earth and likable, albeit not particularly clever or insightful. I suspect that the film will play to viewers’ expectations. Still, this middle-of-the-road sensibility means that the film doesn’t quite dare reach for particularly hard-hitting conclusions. It’s worth noting that Leone has added more than a dozen Bollywood titles to her filmography since Mostly Sunny’s release — I can’t vouch for their quality, but it sure seems as if her career is doing just fine even three years later.